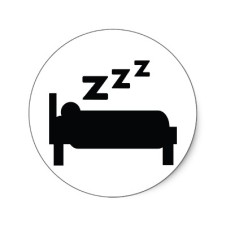 This week, I’m not having a vacation, I’m not even having a staycation. I’m having a sleepcation!

I was calling it a bedcation at first, but it turns out that fake word already exists and isn’t quite right in this situation. So, sleepcation it is.

As of this past Saturday and until this Sunday, I have 9 days where I’ll be sleeping as much as possible for as long as possible with as much sleep as possible. Because sleep is good. Especially after overdoing it for too long. It’s either sleepcation now or crycation later. You can probably imagine what that entails. Of course, we all can use a good cry now and again, but 9 days straight sounds exhausting.

So, if you need me, my bed and I are going to be getting it on.

And OK, I’m hoping to also edit that video and write that web-series script, two things I’ve been trying to get to for a few months now. You see, as it turns out, I’m not very good at doing nothing. Even when not on vacation, I fill my time up with projects. I hear other people go home after work and watch TV or something. If I want to watch TV, I have to schedule it as a weekly thing and make an event out of it.

So I’m trying to sleep and lounge around and just decompress. So far I can’t say I’ve been terribly successful. While I have slept a lot (I’ve always been real good at that), I’ve also stayed up real late, and during the day I’ve been working on The Comics Observer, done some administrative stuff for the Magic Meathands, and been an obsessive dork about our music library. But I’ve also hung out with Nahleen and Cleo some, watched the Twin Peaks episode 6 (my favorite so far!), and started reading Any Empire by Nate Powell (if you’re a child of the ’80s, read this!). And I’ve kiiinda not been on Facebook a ridiculous amount, although I’m still staring at the computer way too much, which I’m sure isn’t entirely relaxing. But the week has only started. I’ll get this right some day.

Anyway, I can’t believe I just reviewed my own vacation.

How do you do with taking time off? Do you like empty time or do you need to keep just as busy as when you’re not on vacation? Or maybe you’re good at finding a satisfying happy-medium?