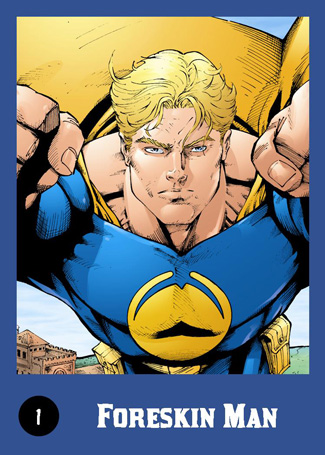 The first issue of this comic came out last year, but it’s getting a whole new round of coverage with the recent release of issue #2. The San Francisco Chronicle, Los Angeles Times and LAist covered it last week within the context of efforts in San Francisco to pass a bill that would ban circumcision for children under 18 years old. Apparently 7,743 people in San Francisco think this is a real issue that needs to be addressed, so the bill will actually be on the city’s November ballot. If passed it would result in $1,000 fines and jail time up to a year for those that have children circumcised, even for religious reasons. Purely a coincidence, but Foreskin Man was created and written by Matthew Hess, the president of MGMBill.org, an activist group seeking to get this exact kind of legislation passed on the basis of human rights.

You can read the comics at ForeskinMan.com [link corrected] and decide for yourself. Personally, I’ve learned that if you want to stop someone from having their child circumcised, it is perfectly fine to abduct said child and hand them over to some shifty biker gang. This is much less traumatic and emotionally damaging than a surgical procedure the baby won’t even remember. But read it for yourself and decide whether the comic is simply using exaggerated character types typical for the superhero genre to illustrate their… point, or whether they’ve gone too far and should just… cut it out. Or off, as the case may be.