“Did I do all that?” asked Ronald Searle in an interview with Channel 4 News last year, reflecting on his immense body of work. “I must’ve been a maniac.”

Searle, who created the popular St. Trinian’s, died in his sleep during the night of last Friday, December 30. He was 91 years old.

The St. Trinian’s cartoons, first growing to prominence in the late 1940s, satirized British boarding schools by depicting subversive and naughty, at times criminally so, school girls. They inspired a series of movies in the ’50s and ’60s, and a recent relaunch. But perhaps more significantly, they catapulted Searle onto a national and even international stage, as he went on to illustrate books, such as the popular Molesworth series by Geoffrey Willans; magazines like Life, The New Yorker and Punch; travel and poetry books; advertisements; and more. His immense output influenced hundreds of future artists, including Matt Groening (The Simpsons), Pat Oliphant (Pulitzer Prize winning political cartoonist) and Richard Thompson (Cul de Sac). 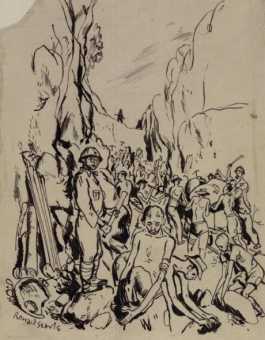 In the Jungle - Prisoners Cutting Into the Mountain near Konyu, Thai-Burma Railway, June 1943 (Imperial War Museum)

More amazing than all of that is Searle’s World War II experience, which established him as a fearless artist and chronicler. He enlisted in the Royal Engineers, where he was stationed in Singapore until it was overtaken by the Japanese in late 1941. Searle became a prisoner of war, where he was eventually shipped to Burma as forced labor on the Death Railway. Over 60,000 Allied POWs worked on the project, with 16,000 dying in the process (6,000 of them British soldiers), in addition to some 200,000 Asian laborers with about 90,000 dying. The jungle was a breading ground for cholera, and the harsh conditions and poor treatment left those that didn’t die malnourished, sick and near-death. Over the four years as a POW, Searle’s weight dropped to 85 pounds or less, he contracted malaria (25 times!), dengue fever, beriberi and suffered from a tropical ulcer that ate his ankle to the bone and some skin condition that covered his body in a festering crust. He was also subjected to beatings and even a guard’s pick axe in his back. Through it all, he kept drawing to capture the horrors he witnessed. Some 300 illustrations were created and hidden away under the mattresses of dead cholera victims and other places that guards wouldn’t touch. Discovery would’ve resulted in decapitation.

Following his liberation at the end of World War II, some of this work was published but it was apparently “too soon” for readers at the time. However, To the Kwai – and Back: War Drawings 1939-1945, published in 1986 by Souvenir Press, fared better. Most of the illustrations are also displayed in the Imperial War Museum in London.

In the ’70s, he helped his wife Monica, who was going through intense chemotherapy treatment for an aggressive breast cancer, by drawing “romantic and perfect” cartoons of Monica as Mrs. Mole, a blissful cartoon character content at home. Each time his wife received a treatment, he would give her a new drawing of hope for what the future could hold. 47 were made in all. The two ended up having 50 long years together. She died this past July. Last October, following one of her final wishes, Searle published for the first time the illustrations he had made for her. Les Trés Riches Heures de Mrs. Mole was released in Europe in support of National Breast Cancer Awareness Month.

Following his death, his family released the following statement earlier this week: “Ronald William Fordham Searle, born 3 March 1920, passed away peacefully in his sleep, after a short illness, with his children, Kate and John, and his grandson, Daniel, beside him, on 30 December 2011 in Draguignan, France. He requested a private cremation with no fuss and no flowers.”

Nucleus just east of Los Angeles has a gallery exhibit on Ronald Searle scheduled to begin this Saturday, January 7, with an opening reception from 7 to 10 PM. The exhibit closes Sunday, January 29.