Here’s a video made through a spontaneous team-up with Weyward Sisters Productions. It was great fun to meet them and collaborate on this. Hopefully it’s enjoyable whether you know about comic books or not. In case it helps, go through the jump for the back story and info on how this was made through the magic of Facebook.

Throughout the month of April, DC Comics released all of their comics with special gatefold covers that folded out for a shocking reveal. This month-long promotion was initially marketed as WTF Certified, but that label was later dropped, possibly when the internet repeatedly reminded DC Comics of the meaning of WTF. Despite all of that, the comics were still released with a number of surprises. I teamed up with Weyward Sisters Productions to document my response to these comics.

So how did we team up? On March 20, I posted to Facebook that I had an idea for a short comedy video and asked if anyone wanted to produce it for me. I knew I was much too busy to produce it and knew that a number of my Facebook friends are creative like that. Honestly I didn’t expect anyone to take me up on my offer, which is why I described the concept so much. I figured if the idea’s life was just people reading my status and imagining it, good enough. But then Nancy Dobbs Owen less than 10 minutes later saying that her partners in Weyward Sisters might be interested. Nancy and I knew each other through our mutual friend Cindy Marie Jenkins, but we had never actual met. Still she was excited, so I was game. We exchanged Facebook messages to work out details and set up a meeting, where I met the Weyward Sisters for the first time. We easily hit it off, they tweaked my idea here and there to make it better, and we were off! The whole thing was a blast and I hope we get to work together again.

Here are pictures from our shoot. 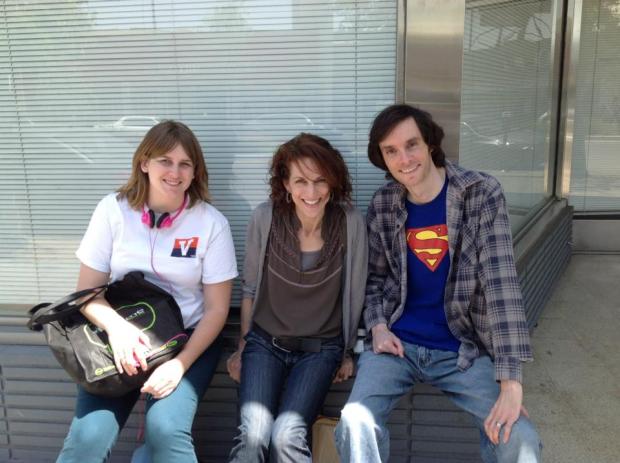 Many thanks to Heidi Marie, Nancy Dobbs Owen and Samantha Macher for grabbing my idea and running with it. Also thanks to Mark Ostrander for being such a great abused bus passenger and Samantha for being oblivious.