The Comikaze Expo debuted at the Los Angeles Convention Center at the beginning of November. This brand new comic book convention joins a crowded field to get a major comic con in the city. Many have come and gone over the years. Will this be the one that sticks? Guest-blogger Cindy Marie Jenkins attended Comikaze and shares her thoughts.

Cozying up to Alex Leavitt's laptop

I truly went to this on a whim. A friend threw it out on Google+ and I thought it sounded like fun, and a low-key way to introduce myself to attending conventions. For various reasons in my storytelling world, I need to stay involved in the larger industry.

So I went expecting….what, exactly? The website gave detailed information about the panels and that was encouraging. I knew I would have to decide between some very interesting topics. Scanning through the guests and vendors, I found a lot of brand names or people that I knew and looked interesting. The Guests of Honor, though, left a weird taste in my mouth. I am new to the details of this industry, but I had no idea that the Nickelodeon show “All That” fell into geek culture.

Yeah, that’s because it doesn’t. They were the main attraction though. Stan Lee – very cool – and Elvira – a respectable mainstay, I’m guessing?  – also headlined. I can understand needing a more mainstream attraction like an “All That” Reunion except that, actually, I can’t. Again, I’m new to conventions, but in what alternate universe should Stan Lee be overshadowed by “All That” at a comics convention?

That aside, the event itself was fun. I didn’t know there was a program which is good because they apparently ran out of them in the first hour. I had printed the panels, but no map to the floor. That’s not a big deal; I could wander around the room to decent effect. However, at the entrance they only let people inside two at a time, which left a little excitement to be desired. Translation: way too orderly an entrance to rouse anticipation. It felt like we were being let into a museum. 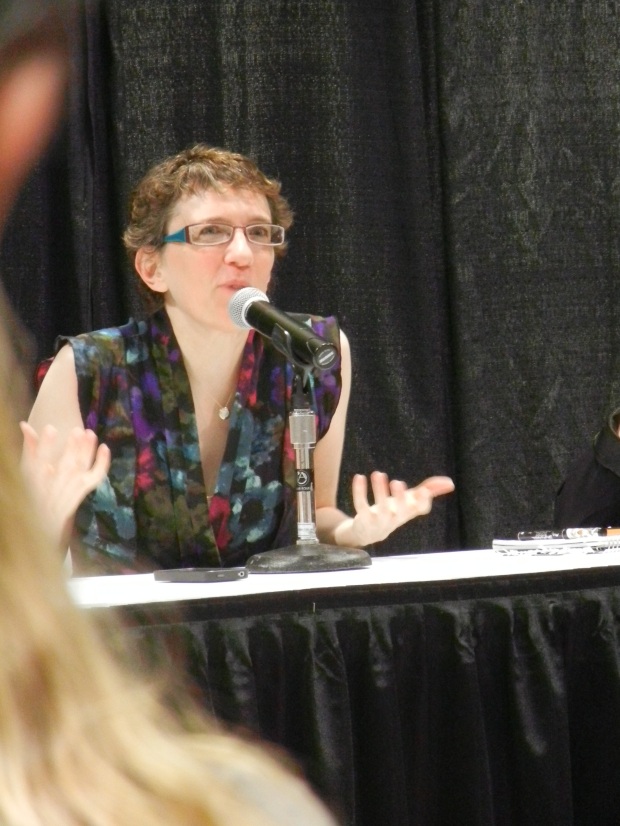 On the comics note, I noticed I’m more inclined to risk $1-10 for an issue rather than pick up a free one; most likely because I don’t want to seem like a swag free-loader. Also, cheaper trial issues assured I had enough money for a few of them, rather than blowing my whole budget on one new title to try. That feels more in the vibe of a convention, so new audience can experiment with what they read. I have already enjoyed many of the titles and webseries I found there since last weekend.

The two panels I attended were definitely the most interesting parts of the day. The first was run by Alex Leavitt from USC Annenberg on otaku and the role of anima, manga and otaku in Japanese culture. He braved through a largely visual presentation with no projector, thanks to the Expo simply not providing him one, according to Leavitt. We crowded closer to his laptop, which was actually quite a lovely setting, and we saw the visuals if not the video well enough. Poor young Leavitt also battled the consistent overwhelming cheering of the “All That” Reunion. Overall we got the gist of the topic; I do wish he’d delved deeper into the very interesting examples he gave. I learned what otaku means and have a better idea of how close their geek culture is to ours. We are the world. I would have liked more meat.

The next panel I attended was Character Studies: Geek Girls in Popular Culture, with Jane Espenson, Amy Berg, Cecil Castellucci, Sarah Watson, Sarah Kuhn, Jessica Mills and Stephanie Thorpe. Moderated by Amy Ratcliffe. (Here is a general conference pet peeve: why are panelists’ Twitter addresses not listed anywhere? I missed one of my favorite Twitter personalities, Black Nerd Comedy, because of no program/map, and wasn’t lucky enough to catch his tweets about the event*).

Back to the panel. I am now the biggest fan of Jane Espenson, but that doesn’t take much. She’s awesome and a role model for many of her fellow panelists. This panel was kept kind of upbeat and light, which wasn’t hard with six women incredibly happy with their lives and work. A very humorous moment came when the ASL Interpreter was asked what the sign for “D20” is. She made a motion like rolling a die, and then was careful to demonstrate the difference between that sign and one not quite as G-rated.

These guys are seriously my favorite from MAD magazine of yore

CosPlay fascinates me, but my only venture into it involved east coast renaissance faires so I could show off my sword. At Comikaze, I snapped a few shots while others posed, and had a hard time asking for anyone to pose just for me. The one character I did have the guts to ask was an absolutely stunning Witch King of Angmar; however, by the time I found my courage, his helmet was off so he can eat lunch with his son. I didn’t want to intrude on the Witch King’s lunch. I do wish I’d gotten that picture.

Since one of the biggest reasons I attended was to get a sense of the culture and be prompted to read or watch new stories, Comikaze Expo earns a rousing success. In no particular order, I discovered the League of Extraordinary Ladies, Reed Gunther, The 36, reMind, Shelf Life (had known about through Yuri Lowenthal & Tara Platt but prompted to watch after seeing writer on panel), Awkward Embraces (another I heard enough about but actually watched all of Season 1 yesterday), ran into Comediva again after an intro at the Broad Humor Film Festival (they win for best hook to get people to their booth), Jefbot, The League of S.T.E.A.M. (donated to their kickstarter for Season 2 but first time seeing them in person. They get the best carnival barker award), Americana: The Book Series, Elizabeth Watasin, Jody Houser, Eliza Frye, the Winner Twins (haven’t checked out yet but they self-describe as “identical twin teenage dyslexic scifi authors”), and Olivia Dantes.

A few cool combinations of art and social good, which is a very public crusade of mine: The Winner Twins tour the country with Motivate 2 Learn, “a nonprofit inspiring students to read, write, overcome obstacles and teach their creative writing method.” Princess Leah postcards were everywhere, asking for donations towards medical bills to help a young baby Leah suffering from a mysterious illness; lastly, the California Browncoats have fun fan memorabilia and artist-donated fan calendars that go to different charities. Check them out – support art – help a cause. Everyone wins!

Mandalorians vs. The Leage of S.T.E.A.M.

There were definitely first-year problems. I’m a novice to conventions but not to events or performance, and rather than dwelling on the criticisms I know they’ve received (thank you Facebook), I want to offer some solutions.

*Continue of pet peeve:
Help tweeting loudmouths out and reap the promotional benefits: put the event hashtag everywhere and encourage all speakers, vendors, etc, to post their Twitter addresses as a sign. Point everyone to your business and give them all the tools to help a vendor, and direct everyone following the hashtag to find vendors and artists of their choice. I mostly found out at least ten of my friends were there thanks to the #Comikaze hashtag, and although most intermediate Twitter users pick up on it, encourage its use with signs.

Overall, the flow felt adequate and kind of like an indoor swap meet. I do wonder why more like-minded vendors aren’t placed together. Is it a quandary over competition? I bet if I’d walked through all five steampunk vendors at once, I would have bought something. Ditto for independent comics section. Has this been tried at other conventions and discarded? The autograph area was packed together for sci-fi specific actors, but that left poor Claudia Wells (original Jennifer Parker in Back to the Future) all by her lonesome and way on the other side of the hall. I wasn’t looking for signatures myself (although “The Voice for The Archies” Ron Dante almost got me to buy something), but I can’t imagine the original girlfriend of Marty McFly means much by the time you pass the Lasik Eye Surgery booth, take a left at the guy selling all his Star Wars memorabilia, and finally get to hers.

I will absolutely return next year, with a larger budget and more room in my schedule for panels. It’s looking good that many of the titles and series I’ve enjoyed since our introduction are keepers, so the artists get more fans. Multiple crafts vendors got my attention and money, but special artisan beauty goes to Sev’s Wood Crafts, “Where one good turn deserves another!” according to his card. I’m writing about scribes right now, and had a massively difficult time not buying half his stock instead of paying my student loans. The very happy purchase I did make was a dragon-shaped bookmark, created out of turkey vertebrae transformed into beads.

That, plus encouragement for female writers garnered during the Geek Girls panel, was well worth my time and budget. I am confident they’ll listen to the very vocal feedback to improve next year.

———
Cindy Marie Jenkins admits her childhood playmates were Gilbert & Sullivan. She works as a Storyteller and Director of Online Outreach for Social | Impact Consulting LLC. Current writing found at the Blue Dragon Scribe Shoppe and MYTHistories. @CindyMarieJ. She is a big fan of beer. CindyMarieJenkins.com