It’s 1987 and the Fall of the Mutants is almost here. But first we have some set-up to do. There’s some good stuff in these issues, Uncanny X-Men #220-224, but it’s definitely a lot of arranging the chess pieces for the big summer event.

Storm gets most of the focus, as her subplot finally boils to the top. Meanwhile the rest of the team continues to establish themselves as the new official line-up, with Dazzler usually getting highlighted.

I’ve been reading the entire Uncanny X-Men series (very slowly) from it’s start in 1963 and am trying to make it all the way through to 2011 when the original series ended. If I can make it through that, I may continue on. We’ll see. You can read all of the entries here.

I have to confess, I’m not digging this period as much as I thought I might. I’m not really connecting with the new team members and part of that feels like it’s mostly The Dazzler and Friends Show. In this batch particularly, if an issue is going to focus on a single member of the team, it’s always Dazzler. Maybe she’s meant to be the POV character, similar to Kitty Pryde’s original role, but it just ends up feeling very unbalanced as an ensemble book. She’s OK as a character but I’d sure like to learn more about the others.

Longshot is basically in a constant state of staring wide-eyed at the world, which is amusing as a supporting character role, but nothing has been done with it. In fact, nothing has been done to fill in his back story at all for those that hadn’t read the Longshot mini-series or the Uncanny X-Men Annual that brought him onto the team (like myself). We’ve gotten very little insight into how he feels about his situation or why he’s even on the team. Emotionally, he’s pretty much in the same state in every scene. Even in battle, his luck powers help everything work out fine for him, so he never seems to be in any danger. This flat character state suggests there’s nothing else to him. I know that’s not the case but it’s approaching a year and we’ve really gotten nothing on him other than he has no memory and this world is strange and wondrous to him.

Havok certainly makes up for Longshot’s lack of emotional depth. He’s been forced back into the mutant world and his girlfriend seemingly betrayed him to go lead the bad guys. Like his brother Cyclops, Havok can get a bit cloying and winy but he at least wins sympathy points. In one scene, his girlfriend just taunts him to strike at her as she escapes. He finally does and then she just laughs at him as her powers block his powers. It was a tad over the top in how evil she was being, but to be fair, she is being mind-controlled by a character named Malice.

Psylocke is probably the most interesting to me, of the new members. I like the juxtaposition of her pull to be more cold-blooded despite her look with her frilly pink costume and hair. But she hasn’t gotten all that much focus since she officially became a member of the team. She’ll make a comment here or there that reinforces she’s willing to go further than other members of the team, but we get little insight on her internal push and pull.

Poor Rogue really hasn’t been doing anything other than acting as a foil to inspire Dazzler stories. Other than that, she was used as a plot device: she got a warning that the X-Men are going to die in Dallas while helping Storm, which of course promptly inspires all of the X-Men to immediately run to Dallas. 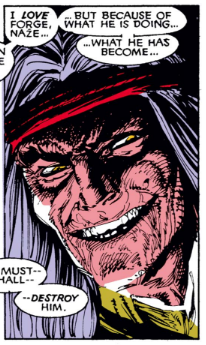 What’s crazy is that this is a very turbulent time for the X-Men. They are without a home, the Marauders are hunting them and their loved ones, mutants are feared and hated more than ever – there’s a lot there for characters to reveal themselves through their response. And we don’t get that like we used to.

I don’t want to make it seem like I’m hating the new team, though. While not as strong on character development and exploration, there was a fun X-Men vs. the Marauders rematch in this batch of issues, that was mostly well choreographed. And Marc Silvestri makes for a good regular artist with this cast (especially when inked by Bob Wiacek). It just doesn’t seem to explore the characters quite like it did in years past.

Speaking of the Marauders, this batch of issues features the introduction of Mr. Sinister. This villain was teased as the mastermind behind the murder of the Morlocks during the Mutant Massacre. (Wow, there are a lot of m’s!) He is quickly established as being very powerful, easily subduing Sabretooth. This becomes a common trick. Whenever you want to establish a new character as a big deal, have him easily handle one of the cool characters like Wolverine or Sabretooth. Mr. Sinister is a goofy name, and apparently the original plan was that he was going to be the manifestation of a little boy’s idea of a bad guy. That also fits in with the crazy flamboyant design of the character, complete with jagged teeth and a cape made of streamers. At this point, we don’t get any real clarity on why he wanted the Morlocks killed, but now he’s obsessed with eliminating Madelyne Pryor, who ends up semi-joining the X-Men in this arc.

Madelyne Pryor continues to be an odd character. She was created with very strong hints that she was Jean Grey reborn following that character’s death at the end of The Dark Phoenix Saga. Then those hints were dismissed as mere coincidences, allowing Cyclops to retire from superheroing so he could marry Madelyne and then have a baby together. Fortunately those hints haven’t been forgotten. There’s even a panel with a Phoenix-like bird in flames over Madelyne during a flashback to her mysterious plane crash. Cyclops has left Madelyne to reunite with Jean Grey on X-Factor, and unbeknownst to him (I think) their baby has been kidnapped. Madelyne rightly blames Scott for a lot of this because it’s generally not cool to walk out on your wife to go hang out with your ex-girlfriend. She and Havok bond over having their significant others abandon them, and Madelyne proves herself to be tough despite having no powers.

But back to that character development stuff. Fortunately, the two mainstays on the team, Storm and Wolverine, are getting more attention in this department, although lesser so Wolverine. He is well established as the most popular character on the book, but most of his character development has been happening almost in the background or as as small nods within a scene. He’s the reluctant leader of the team during Storm’s absence. Recent injuries have made him doubt his skills. He’s also more tired and doesn’t seem quite on his game like he used to. He’s moving into the wise, old samurai role. These are all little hints dropped in, which make for a nice touch.

*sad trombone* as Storm realizes she blew it

Storm gets some really good focus in this set of issues. For a bit too long, she’s been searching for Forge, the man who invented the high-tech gun that took her powers away. There’s a great sequence of her going back to his old penthouse in Dallas, and her discovering how obsessed he might’ve gotten about her after she left him. (Although there’s a really lame metaphor sequence with two birds, with one that has a little white mohawk. Guess which one is supposed to be Storm.) To help find him, she teamed up with his old mentor, Naze, who believes Forge has been corrupted by an evil Native American spirit called the Adversary. In truth, the Adversary is disguised as Naze, and she’s being manipulated to stop Forge. It’s kind of a classic setup, and I kept waiting for her to discover she’s been duped and for her and Forge to team up and defeat Naze/Adversary. Surprisingly, she finds out too late, and they actually lose. While I was disappointed that Storm was duped, it made for a more exciting read, and of course sets up the big encounter to come in the Fall of the Mutants event.

Up next: The X-Men’s second official summer event, The Fall of the Mutants.